WASAVIES represents “WArning System for AVIation Exposure to Solar energetic particle”. It calculates the radiation dose rates due to cosmic-ray exposure anywhere in the atmosphere in real time, and issues an alert when a sudden increase of the dose rates is detected due to the occurrence of large solar flare. It was developed by National Institute of Information and Communications Technology (NICT), Japan Atomic Energy Agency (JAEA), National Institute of Polar Research (NIPR), Hiroshima University, National Institute of Technology Ibaraki College, and Nagoya University under the framework of Project for Solar-Terrestrial Environment Prediction (PSTEP). 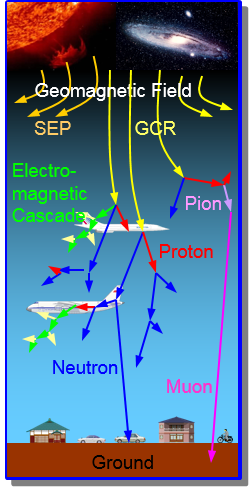 Figure 1: Schematic view of the atmospheric propagation of cosmic-ray

Aircrews are subjected to be exposed to enhanced level of radiation doses due to cosmic-ray exposure (see Fig. 1). As a result of the release of International Commission on Radiological Protection (ICRP) Publication 60 in which the aircrew exposure is recognized as occupational hazard, many countries have issued regulations (or recommendations) setting an annual dose limitation for aircrews. Development of a tool to estimate the aircrew doses is indispensable for keeping the regulations.

Two sources must be considered in the dose estimation, which are galactic cosmic-ray (GCR) and solar energetic particle (SEP). GCR are continuously incident to the atmosphere, and they are the main course of the cosmic-ray exposure during solar quiet period. Their radiation dose rates gradually vary with the 11-year solar cycle, and several tools such as JISCARD were developed for the post-exposure evaluation of the aircrew doses. On the contrary, SEP are incident to the atmosphere only when a large solar flare occurs, but their radiation dose rates occasionally become much higher than those of GCR – more than 2 orders of magnitude.

Thus, it was desirable to develop a tool for estimating the SEP dose rates in the atmosphere in real time.

We therefore developed a physics-based model for SEP dose estimation anywhere in the atmosphere and designated it WASAVIES: WArning System for AVIation Exposure to Solar energetic particles. When high-energy SEP are incident on the atmosphere, they induce extensive air-shower (EAS) by producing various secondary particles, such as neutrons, and increase the count rates of neutron monitors (NM) at the ground level. This phenomenon is called ground level enhancement (GLE). WASAVIES automatically detects the occurrence of GLE, and updates the radiation dose rates at intervals of 5 min. Except during GLE, WASAVIES outputs daily GCR dose rates calculated by EXPACS using Force Field Potential (FFP). Figure 2 shows a flowchart of the calculation procedures of WASAVIES. In the system, the profiles of each GLE are characterized by four parameters, namely, injection profile (IP), power index γ of the primary SEP around the Sun, north-south tilt angle of ambient magnetic field incident to the magnetosphere θt, and normalization coefficient of the SEP fluence N0. These parameters are determined automatically from the count rates of 12 selected NMs at the ground level and the proton flux measured by the GOES satellite, which are downloaded continuously at intervals of 5 min from the Neutron Monitor Database NMDB and the Space Weather Prediction Center of NOAA, respectively. Four databases such as the response function of the EAS simulation performed by PHITS must prepared before executing the real-time and automatic analysis program of WASAVIES. In this calculation, the geomagnetic activity is characterized based on the real time Kp index. 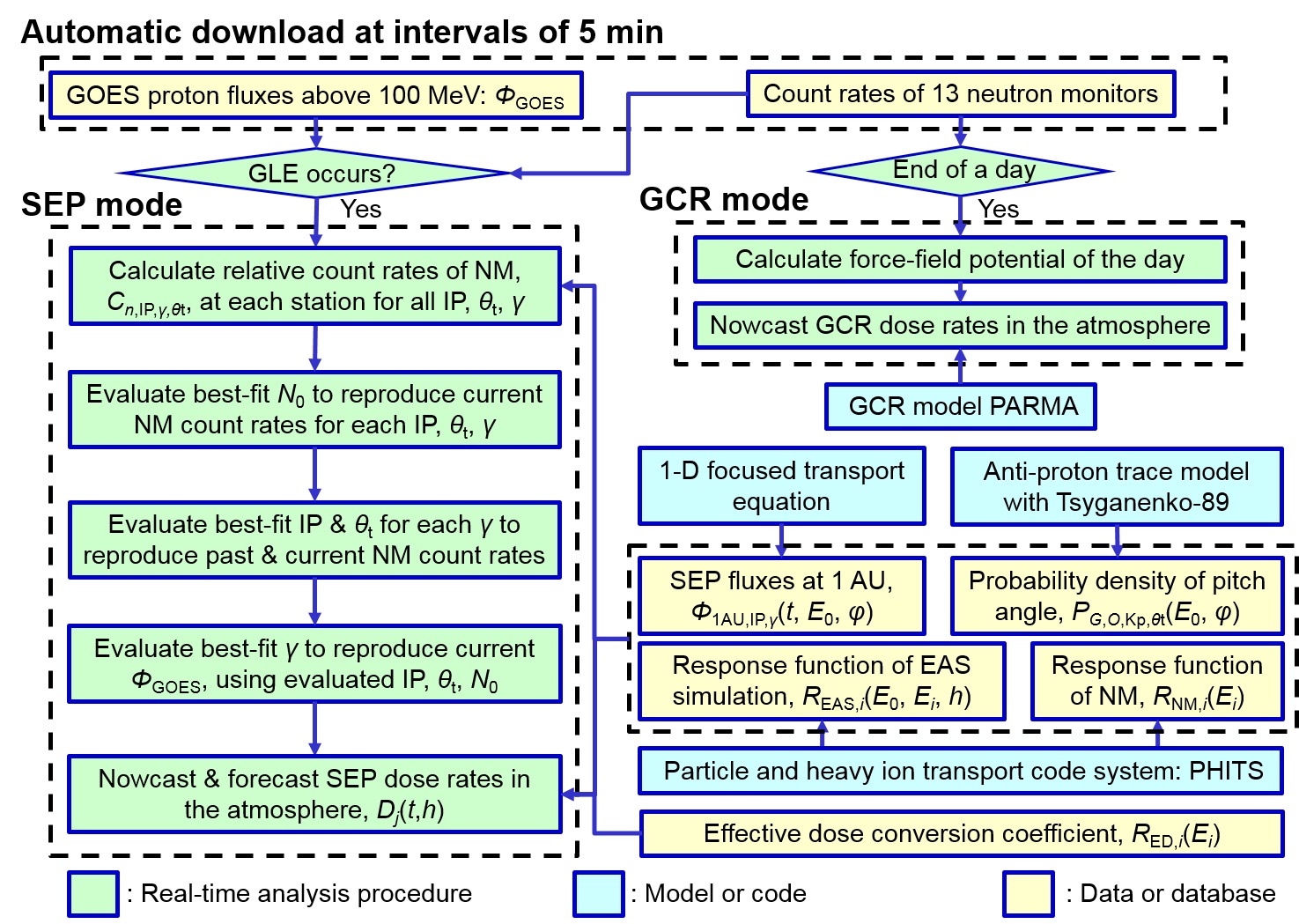 Figures 3 and 4 show the worldwide dose rate map at 12 km and route-dose rate map between Tokyo and London, respectively, during GLE 69 (7:00 UT, Jan 20, 2005) drawn using WASAVIES. The complicated latitude, longitude, and altitude dependences of the dose rates such as the southern asymmetry can be seen in these figures, owing to the sophisticated physics models implemented in WASAVIES. The details of the calculation procedures of WASAVIES together with its validation results are given in our papers (see Reference page). A demonstration of WASAVIES when a GLE occurrs is available. 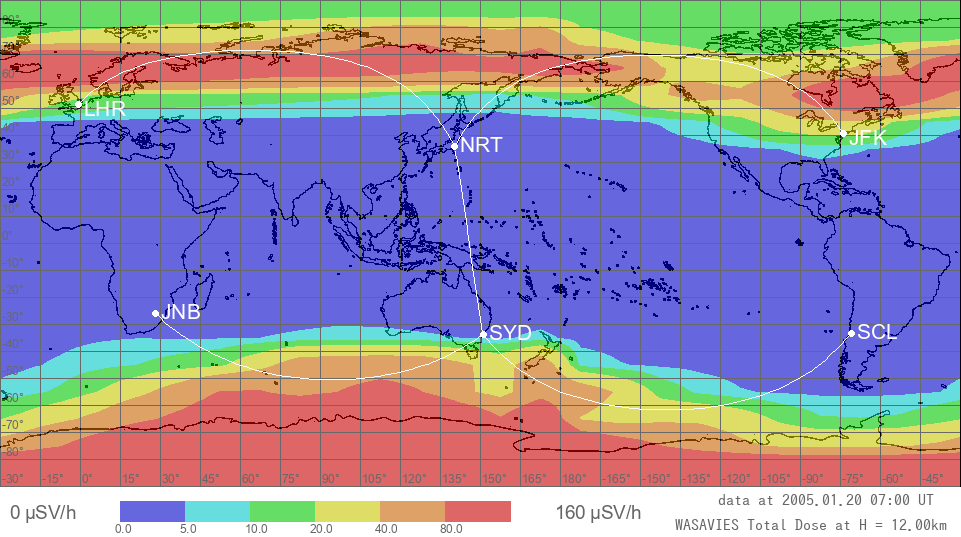 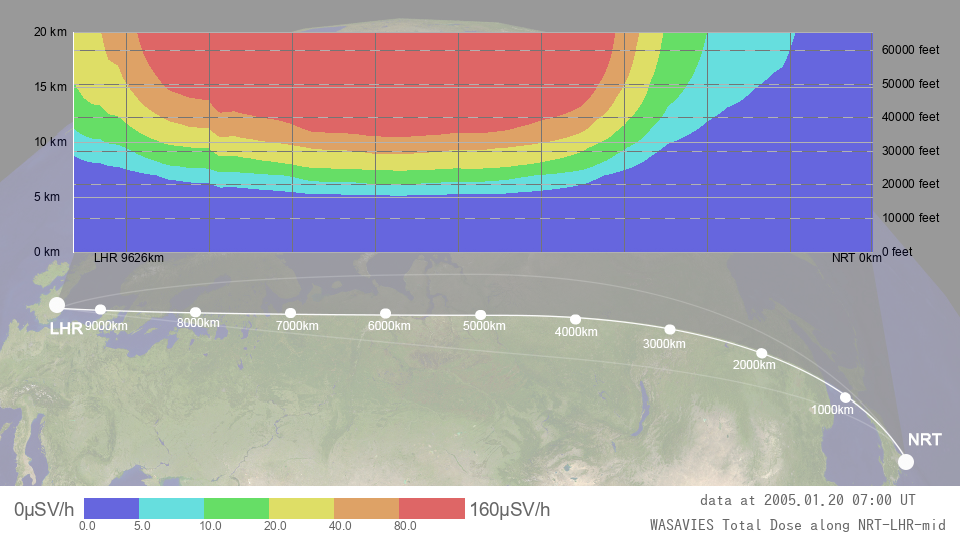 WASAIVES can draw dose-level maps expressed not only in effective dose rates but also in D-index. Table 1 summarizes the classification of D-index. More detailed information on D-index is described in Meier et al.